Fangirling about street art is a lot like fangirling about anything else: you have this idea about what an artist will be like in real life. You imagine their personalities and stories based on what pieces you’ve seen. You feel like you know them after seeing their murals in multiple cities or gazing at photos of their work online and in books.

“I decided to focus on women because I realized that not much literature or film existed on what they were bringing to the urban environment,” Henry wrote in an email. “After my first encounter on the street with female artists, it dawned on my that I had never considered women to be part of the culture. Just always thought of it as male-centric, like many other things. So I wanted to create more awareness on what they were doing, because personally I could identify with the beauty and messaging going on in their work.” 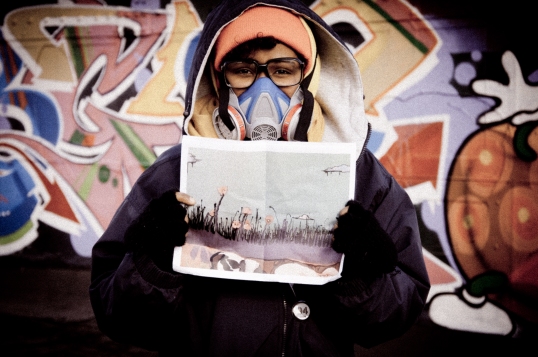 Henry traveled everywhere from New York to Paris to Brazil, discovering artists by word of mouth or through exploring the streets. This makes for a rich variety of artists, both in terms of aesthetic style and personal backgrounds.

“Street Heroines is comprised of women from many countries, especially in North & South America. Brazilian, American, Mexican, Japanese, Chilean, French, Puerto Rican, Argentine, Chilean, etc.,” wrote Henry. “The community is pretty tight, so once I met Miss 1.6.3. from the Bronx in New York in 2012, she told me about other artists and also informed me about an all female street art festival called Nosotras Estamos en La Calle in Lima, Peru.” 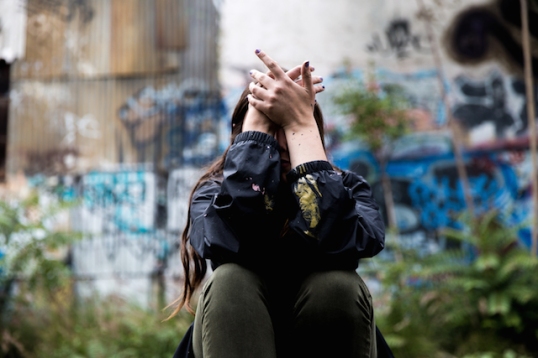 Henry sees the project as a way of “preserving culture” for the next generation and helping viewers look at their surroundings in a different way.

“I have had countless friends and strangers, men and women alike, tell me stories of a beautiful piece of art in the street that they noticed after hearing about my project,” wrote Henry. “They even send me photos or tell me when they’ve met some one doing graffiti or street art. The fact that this project is starting conversations on issues like domestic violence, sexual harassment, economic disparity and climate issues, among others, is very important for us as a society to find solutions.”

Check out the trailer below and support the documentary’s Kickstarter campaign here.

I came across the work of Millo on Instagram and automatically loved his eye for detail and sense of humor (and whimsy). His large murals remind me of giant coloring book pages or vignettes from children’s books.

But each scene is trademark Millo, each story endearing and sometimes mysterious. If you look closely you can find lots of fun details (can you spot the batman Millo in this post?).

The Italian artist has created work everywhere from Holland to Rome. He was kind enough to answer some questions via email. Check them out below!

1. How did you first get involved in public art?

I started in 2010 in Italy for the first time. I decided to follow my passion (I have always drawn since I was a child). I took part in a big event about street, video art, in Ancona… before that I used to paint on canvases.

2. Your pieces are very whimsical, playful and detailed. Do you plan visuals ahead of time or is your process spontaneous?

Even if it should appear strange, I usually go to a lot of festivals without a clear idea of what to realize, only after I have spent in the city some hours,my imagination starts to work.

In any case, I only choose what the characters should do, all the rest is completely spontaneous and free hand.

3. What sorts of materials do you use when you work?

I only use acrylic paint, brushed and a good boom lift!

4. Are your characters inspired by anyone?

My characters are always inspired by someone or something. I used to reproduce things I live or things I feel… sometimes it could be a real person but most of the time it’s a question of emotions.

5. Is there somewhere in the world you would love to paint that you haven’t already visited?

I really would like to paint in Rio even if I’ve been there… But those were holidays!

Women Are Heroes via JR on Vimeo.

As an art form, public art is all about scale: the larger the wall, the better. In transforming huge walls into canvases, street artists have found a way to transform the visual aesthetic, but also function, of a given space. Walls become not just surfaces for painting but areas for social commentary.

Since starting this blog, I’ve been interested in the ways that street art can create an experience — not only aesthetically, but through its ability to spark dialogue. Lately, I’ve especially been interested in pieces that address women’s issues, from violence against women to public perception. Check out a few of my favorite projects: 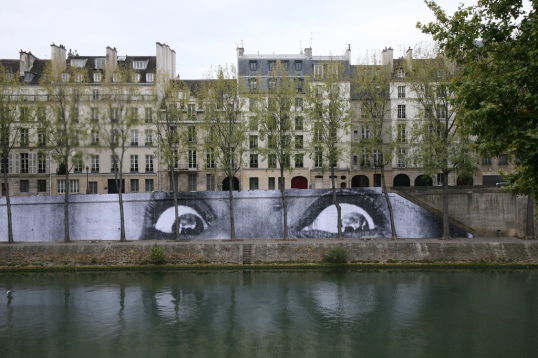 JR often works with portraits, printing large-scale faces and affixing them to public spaces. For this piece, he traveled to Brazil to capture the faces and eyes of women. He then transformed these into large-scale pieces that covered Moro de Providencia favela. The work references the fact that women “are the primary victims of war, crime, rape and political or religious fanaticism.” The project has also taken place in Kenya, India and more.

The simplicity of the project lies in its ability to put a face to the statistics, to humanize the many women who becomes just numbers in reports of violence. The project have gone viral and eventually resulted in a book also called Women are Heroes. 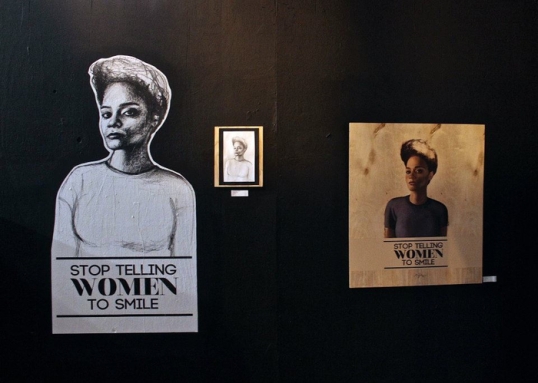 I’m also a fan of Tatyana Fazlalizadeh’s ‘Stop Telling Women to Smile‘ project which has now been installed in various cities. The artist takes a similar approach to JR in that she approaches women to draw their portraits. Fazlalizadeh also hosts meetings so that women can share their negative experiences with cat calling. She creates a safe space for them to discuss these incidents; the phrases included with the portraits are often taken from what the women share. Her work has appeared both on the streets — everywhere from New York to Paris — and in the gallery setting.

Fazlalizadeh told the New York Times: “Women need to start talking about their daily moments because it’s the smaller stuff that affects the larger things, like rape, domestic violence, harassment in the workplace.” The pieces reverse the male gaze, throwing back the action of scrutiny with a confidence and assertion that is palpable no matter the city.

Swoon creates intricate paper pieces that she often posts in public spaces. A multifaceted artist, she also creates installations and floating pieces. In 2008, visitors to Honey Space could descend into a cave-like space underground. There, they encountered the Portrait of Sylvia Elena, a paper piece featuring a teenager in her quinciañera dress. A victim of the violence against women in Juarez, Sylvia Elena died at a young age. Swoon met with her mother and learned more about the other dead or disappeared women in the region and created this piece.

After its initial installation, other iterations of the piece appeared in outdoor spaces in San Francisco and Mexico. Paper, a fragile medium, peels away and disintegrates eventually — reinforcing the tragic nature of the violent incidents.

All photos courtesy of Amanda Lynn.

I’ve had my share of fangirl moments when writing this blog. Talking with or meeting the person behind the mural only helps to add more context to a piece. Yes, some mystery is fun — and many a street artist likes to keep his/her identity hidden — but sometimes knowing the thought process behind a specific piece just makes it more meaningful. Or, you know, you might just want to talk to the person because they seem super interesting.

I first ran across Amandalynn‘s work in San Francisco and her female figures seemed to peek out at me from every corner of the city. The SF-based artist often teams up with Lady Mags to create work under the team tag Alynn-Mags. She often depicts enigmatic women surrounded by flowers and other natural elements. In addition to large-scale murals, she also creates fine art. The women are strong and confident, often looking straight out at the viewer as if they know a secret the viewer doesn’t know. Amandalynn’s line work is fluid and vibrant, no doubt due to the fact that she often uses brushes.

She graciously answered a few of my questions via email, check them out below!

Your pieces often feature photorealistic faces. Who are the women in your murals?
The women in my murals are inspirations I find through the women around me. I find these images in personal photos, books, magazines, and the web, then manipulate them to fit into my fantasy-like world.

A lot of your murals are collaborations with Mags. How did you two meet?
I met Lady Mags in 2011, we shared a car ride back to San Francisco from Los Angeles. After talking for 5 hours straight, she invited me to paint a wall with her. I never imagined that I would find so much inspiration and life long friendship from painting murals and fine art together, and I feel incredibly lucky to have her as my artistic partner!

When you have a blank wall and full spray cans, what color do you reach for first?
Well I don’t use a lot of spray paint, I am much more of a brush painter, and my first color is always black! I tend to rely heavily on my underdrawing and sketches to layout my imagery. I then apply depth and shadows through different color layers and washes. 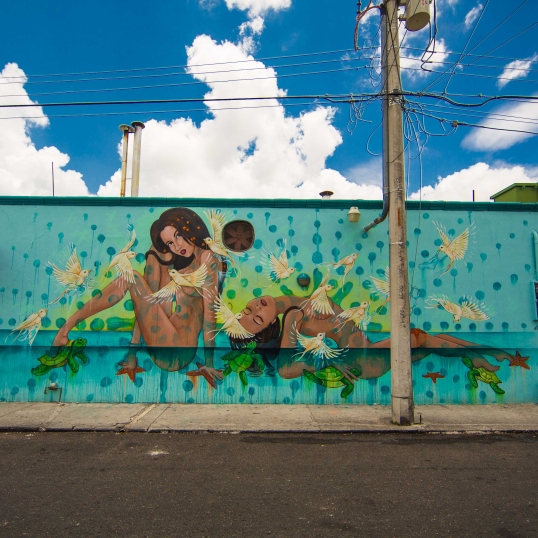 What is one of the most challenging surfaces you’ve worked on?
I worked on a wall this year that had grooved siding, electrical wires, painted windows, random nails, a bum camp and lots of human pee everywhere… I ended up using a lot of spray paint on that wall because the surface was too intense for brush. And yes! I also wore gloves!
Is there somewhere in the world you would love to paint that you haven’t already visited?
Yes! I actually would love to paint all over the world. My international painting experiences have been my most favorite. I really love painting in smaller communities, it’s extremely rewarding to have locals get excited about what you are doing, and even if there is a huge language barrier, art creates a universal language we all can connect with.